Railway Armbands were worn to denote a worker of some additional importance or as an identifying badge to gain access to controlled areas. As the name suggests, they were generally worn between the elbow and shoulder and affixed with an adjustable leather strap and buckle. In pre-grouping days, they were usually made from brass, curved to fit snugly around the upper arm. Later, many companies adopted enamel but followed the same style of curvature with fixing straps. Cloth examples followed  and both styles invariably had company initials incorporated in the wording. Both enamel and cloth perpetuated into BR days. The latter generally having double straps to affix to the arm.  The L&NWR were prolific users of many types of Armband and  these are extremely collectable. Those bearing the station location are much sought after and  discerning collectors find extremely desirable. 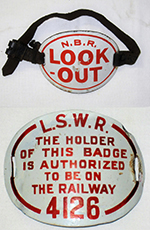 LSWR Enamel Arm Band. LSWR THE HOLDER OF THIS BADGE IS AUTHORISED TO BE ON THE RAILWAY 4126. Minus leather strap with enamel touched up in odd places together with an NBR enamel Look-Out arm band complete with original leather strap. Small chip on front. Auction: December 2021 Sold for: £70
11 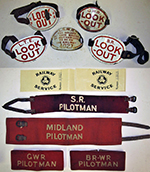 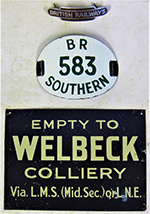 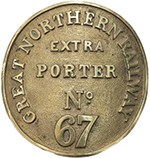 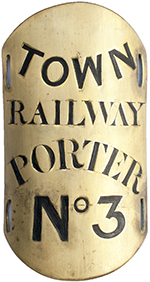 Railway brass armband TOWN RAILWAY PORTER NO3, hand engraved wax filled brass. Measures 6.5in x 4in and is in good condition. It is suggested that Town refers to a grade of porter rather than a location. Auction: November 2017 Sold for: £200
305 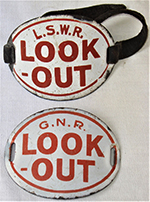 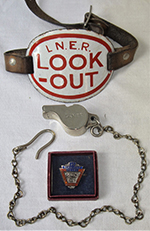 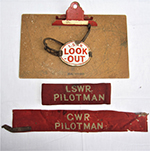 A collection of 3 x LOOK-OUT Arm bands from the LONDON TRANSPORT BOARD. Two with leather straps together with an LMS WOLVERHAPTON 1927 repairs Wagon plate. 4 items. Auction: October 2019 Sold for: £60
Back